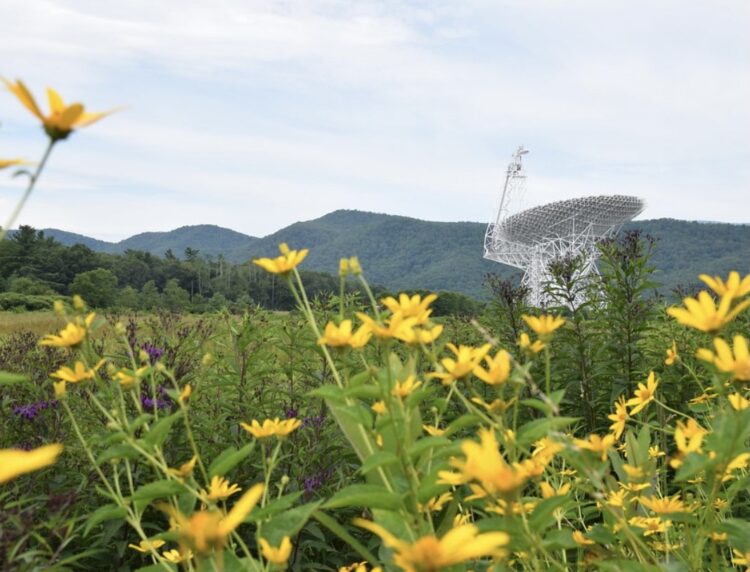 The Green Bank Observatory — in Pocahontas County — has several projects underway that could help astronomers and researchers further understand our galaxy and universe.

Mechanisms at the observatory search for extremely faint radio signals from across the universe, which necessitates its location in the National Radio Quiet Zone. This area spans portions of Virginia, West Virginia and Maryland, and radio transmissions there are heavily regulated so as not to interfere with scientific research.

The Green Bank Telescope, which is 328 feet in diameter and nearly 500 feet tall, is the main telescope used at the observatory.

Armentrout said  the North American Nanohertz Observatory for Gravitational Waves (NANOGrav) project is perhaps one of the biggest to be undertaken at the Green Bank Observatory and has significant links to West Virginia University.

“For NANOGrav, they’re looking at these objects called pulsars, which are really rapidly spinning neutron stars, and by timing when those pulses arrive at Earth, we’re able to hopefully see the bending and stretching of space itself,” Armentrout said.

In doing so, researchers hope to understand gravitational waves, which were predicted by Albert Einstein and confirmed during the Laser Interferometer Gravitational-Wave Observatory (LIGO) experiment.

Armentrout, who studies star formation, said  research is also being conducted to comprehend the structure of the galaxy through the examination of areas of high-mass star formation.

“If you were to go outside at night and just look up, all of the stars you see — you can see tens of thousands of them — are all very local. With radio astronomy, we’re able to see much further away from just the local galaxy and really see out to the very far edges of our galactic home,” Armentrout said.

“Some of the most exciting new science that I think is going to come out of the observatory in the next couple years surrounds NANOGrav and the search for fast radio bursts,” Armentrout said.

Additionally, Armentrout said  new instrumentation is being developed at the observatory that will be able to detect higher frequencies of radio light through a project called Argus. This technology would enable scientists to map out molecular gas in the galaxy rapidly. An Argus prototype is currently on the Green Bank Telescope.